Image by fernando zhiminaicela from Pixabay

As New Zealand implements further relaxation of lockdown restrictions it is timely to consider what optimal pandemic response strategies are, in light of experience in the antipodes, and how they might be evaluated.

NZ has suspended the normal process of quality evaluation of regulatory impositions via its Regulatory Impact Analysis (RIA) process for the duration of the crisis. The Regulatory Impact Statement (RIS) is a document that should, in plain English, describe the regulatory decision that is to be made with enough detail to enable a non-expert to understand the decisions and the reasoning.

In this blog we consider some key regulatory trade-offs that have been made in the antipodes when responding to the pandemic. These would be the key considerations when preparing a RIS under normal circumstances.

The stated objectives in NZ and Australia have varied slightly

While stated objectives have varied, an R above 1 has the potential for runaway spread of the virus, so in practice, all of the regulatory responses have sought to control the R below 1 through the sum of controls. An R below 1 results in elimination (and suppression and mitigation). The further below 1 the R is, the faster elimination can be achieved.

A good objective needs to also consider the cost – so an objective of achieving an R significantly below 1 (say 0.5) while minimising costs would establish the appropriate trade-offs inherent in the decision.

The approach taken in NZ and all states of Australia is showing clear evidence of working in eliminating the virus – data shows the sum of regulatory impositions has achieved the result of a turnaround in case load growth and an R below 1. This is therefore a collection of ‘successful’ regulatory responses, as measured by the fact that there are no overwhelmed health systems in any of the States, and R is controlled in all cases with minor differences.

Australia has reported a similar pattern of daily cases albeit with five times the population of New Zealand.

Response strategies have, however, varied in terms of the cost

NZ and Australia have chosen strategies that have many common elements. There are also some differences in approaches. The notable difference is the stricter controls imposed in New Zealand. Most commercial operations were mandated to shut in New Zealand, whereas in Australia this was not generally the case, although there are variations by jurisdiction, and many operated under restricted conditions. New Zealand imposed a four stage alert level and moved quickly into level 4 once the decision to introduce controls was made (see: https://covid19.govt.nz/alert-system/covid-19-alert-system/).

All jurisdictions have followed a broadly similar four step process

These four phases are:

In our previous blog we introduced a framework where each intervention is lined up according to cost effectiveness and the cumulative impact on R. The sum of the R effectiveness needs to achieve an R below 1 to put the expected caseload on a path to 0 (elimination). 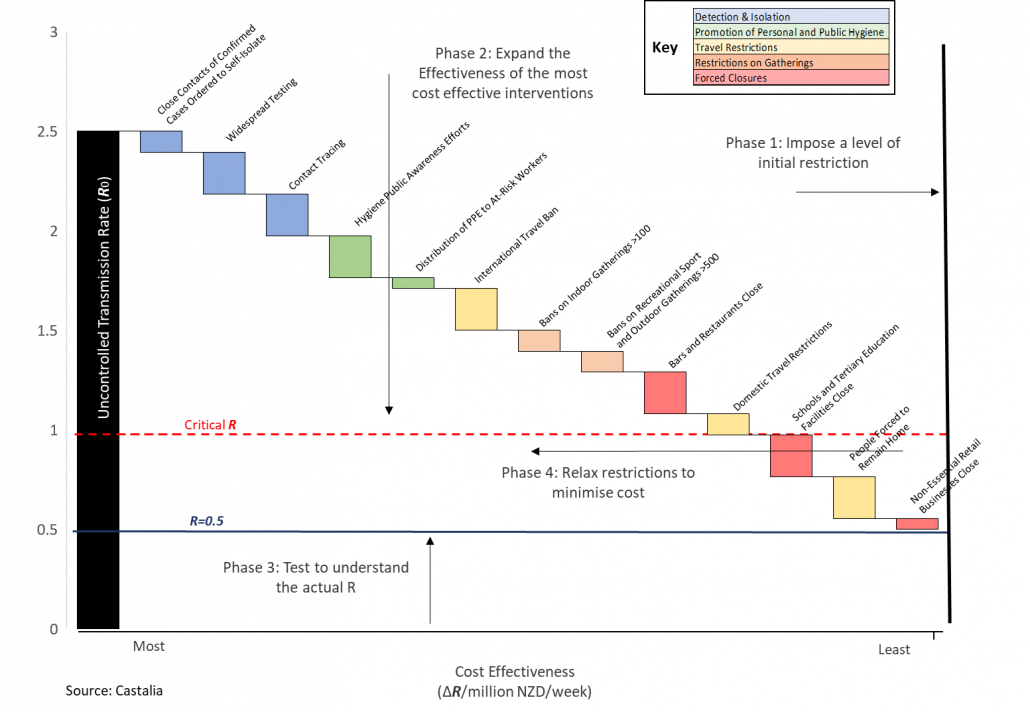 Each intervention has diminishing returns, given the previous ones. Once interventions imposed achieve an R at or about 0.5 additional interventions do not add material incremental value. As the effectiveness of the first interventions are enhanced, there is less opportunity for subsequent interventions to have an impact.

The spread of the virus and the case load when phase 1 is imposed matters in terms of the effectiveness of each intervention. For example, if there are no cases, a border closure alone may achieve near total control of the virus rendering all other interventions ineffective. However, multiple community transmissions across the whole economy might require most of the impositions to control R.

Phase 1: Impose a set of restrictions to control R

The key decision at this stage is when and how many controls to impose in order to manage the R. Similar situations existed in both countries prior to phase 1 in terms of caseloads, however, New Zealand had a higher growth rate of the virus (371% compared to 122% in Australia).

NZ chose to impose more significant restrictions than all jurisdictions of Australia. The extent of business closure in NZ was more significant, including notably construction and food services deemed non-essential including fast food, cafes and the like.

The Australian approach does not line up exactly with a Level 3 approach in NZ partly because responses varied by jurisdiction in Australia but in all cases the response was more like a Level 3 than a Level 4 under the New Zealand typology.

Hindsight is a wonderful thing

In hindsight it might be easy to conclude that the impositions in NZ were not least cost, since lighter restrictions in Australia have proved to have cumulatively reduced R to similar levels.

There are two reasons why a stronger set of impositions in NZ might have been necessary to control the virus:

What is the additional cost of tighter restrictions?

The relative impact of a ‘Level 3’ lockdown compared with a ‘Level 4’ lockdown in New Zealand has been modelled by the Reserve Bank of New Zealand. There is a significant additional cost impost (measured by GDP alone[1]) with tighter restrictions.

NZ GDP by Industry during levels 3 and 4 (as a percentage of pre coronavirus level):

The Australian RBA has not made a directly comparable analysis but they have assessed the changes in employment over the first month of lockdown (broadly comparable to a Level 3 lockdown in New Zealand).

Changes in jobs by industry in Australia during Lockdown: 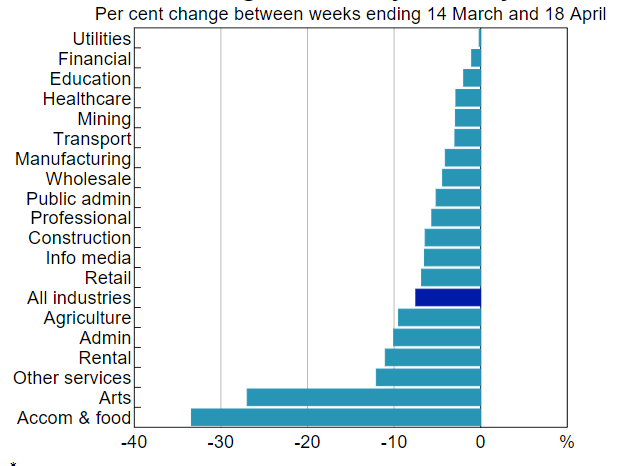 Phase 2 and 3: Enhance the effectiveness of the most cost-effective responses

All jurisdictions have aggressively ramped up their best responses to maximise the R effectiveness and understand the actual R in the community.

There is little difference across all jurisdictions in phase 2 and 3: a focus on contact tracing capability, testing capacity, stricter quarantine conditions and the distribution of PPE equipment have all been pursued to relatively high levels (globally).

Testing rates per thousand in Australia and New Zealand:

Source:’ Our World in Data’ from official sources

Australia has reported a similar rate of testing to New Zealand with over 855,000 tests undertaken to date (Australian Dept. of Health).

A progressive relaxation of restrictions is currently occurring or being contemplated across all jurisdictions.

If Phase 2 and 3 are effective, the stricter interventions become redundant as the target R is achieved with the more cost-effective interventions, thus enabling a relaxation of controls.

This phase is still in progress across all jurisdictions. New Zealand has announced a relaxation to level 2 from May 13, two weeks after a relaxation to 3 from four weeks at Level 4. Level 2 allows for the ‘safe’ re-opening of most commercial operations and educational institutions while requiring social distancing and limits on the number of patrons in hospitality operations. Australia is contemplating easing of restrictions also, albeit from a position of lesser restrictions. A three-step plan to relax all restrictions is currently proposed across Australian states by July[2].

Is there a dividend from stricter controls?

All of the responses have achieved the first element of the objective by controlling the R of the virus in remarkably similar fashion. If the starting risk position was similar, then differences in response can be evaluated through relative cost.

A key question is whether there is a dividend from the additional restrictions in New Zealand. This is not entirely clear yet, but a dividend could be realised in two ways:

A dividend from an earlier relaxation would need to more than outweigh the additional costs already incurred from the four weeks of additional restrictions. This is approximately 15% of GDP according to the Reserve Bank of New Zealand for the period spent at Level 4 compared with the alternative of four weeks at level three. These traded costs are not the entire economic cost however and if nontraded impacts were counted the number would be far greater, but, the costs incurred already from tighter restrictions are approximately 4 billion.

A dividend from better virus control will become apparent over the course of the next few months should Australia turn out to have a less controlled outcome.

If the starting risk positions were not similar, then the value of stricter impositions will be harder to ascertain. The only evidence that they were not similar is the higher reported growth rate in New Zealand prior to regulatory action. These are not the most reliable numbers as testing was not widespread at that stage and New Zealand had a more concentrated number of ports into the country.

About the Authors: Dylan James is a Director in Castalia’s Wellington Office

Disclaimer: The views expressed are those of the authors alone. This work has not received funding from any other organisation or interest.