In this blog, two Castalia staff comment on the evidence base for the New Zealand “Three Waters” reforms. Andreas Heuser, who has lived mostly in New Zealand, and Lewis Whitelaw who has lived mostly in Scotland, describe how the government’s advice and analysis has included inappropriate comparisons between New Zealand and Scotland and why this is important in the context of New Zealand water sector reform. Although New Zealand and Scotland share unspoiled natural landscapes and picturesque lakes (or lochs for Scottish readers) their urban geography and urban water networks are quite different.

The New Zealand government is proposing a major reform of drinking, waste, and storm water services (Three Waters). The Government appointed the Water Industry Commission for Scotland (WICS) to provide analysis that has underpinned the reform proposals. WICS isthe economic regulator of Scottish Water, the publicly-owned monopoly water service provider in Scotland. WICS has drawn key conclusions for the New Zealand reform proposal from Scotland’s geography and water service experience. Conclusions like: “Scotland and New Zealand share many common geographical features – it seems likely, therefore, that the level of expenditure (before consideration of the potential for efficiency in asset management and capital expenditure delivery) required to achieve particular outcomes should be broadly similar …”. The government relies on WICS modelling for two claims:

The image below shows the Government’s proposed four entities and predicted household bills based on WICS’ modelling. 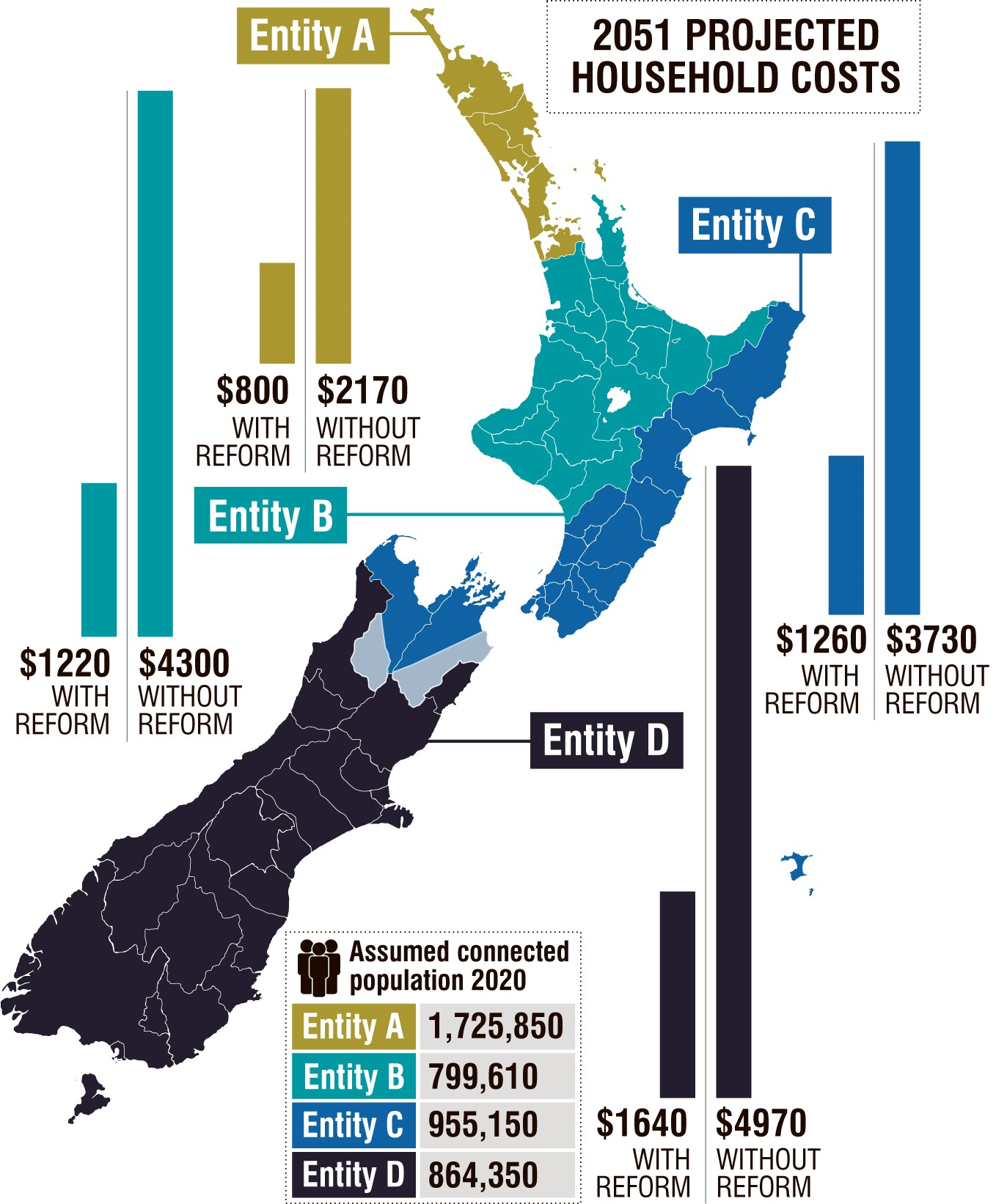 Castalia has advised local authorities on the reform proposal

Castalia has advised several local authorities located in all of the four entity zones on whether the reform scenario will deliver the claimed benefits. We provided each with a robust understanding of the underlying assumptions that underpin the claimed benefits and uncovered key risks associated with the reform proposal. This included a detailed analysis of the geographic comparisons between Scotland and New Zealand made in the WICS modelling.

WICS justifies using Scotland as a model on the grounds that New Zealand has a low level of population density. WICS also assumes that the amalgamated New Zealand entities will achieve a 50 per cent capex efficiency improvement based on the single observation of claimed capex efficiencies in Scotland between 2002-2021. WICS suggest amalgamation will drive economies of scale efficiencies by “asset optimisation” (that is, the ability to consolidate water networks between towns).

New Zealand and Scotland have comparable populations, 4.8 million and 5.3 million respectively. But the similarities start to end there.

New Zealand has a land area slightly larger than the whole of the United Kingdom, and therefore a much smaller population density. New Zealand is also highly urbanized. The population mostly lives in urban towns with significant distances between them. Of the total New Zealand population, 87 percent live in urban environments. New Zealand’s urban population increased by 8 percent between 1996 and 2018.

In Scotland, 83 percent of the population lives in urban environments. The urban population of Scotland is declining, according to the Scottish census agency.

The image below shows the population densities and significant distances between towns in the proposed Entity C. The residents live across a wide geographic area, in a mixture of mostly urban settings. More than 500km by air separates Tairāwhiti and the East Cape from Takaka and Golden Bay (including the Cook Strait).

The towns and cities in Entity D are also separated by large distances, as the next image shows.

In water services, geography is important for the cost and quality of service. Denser urban areas tend to have lower average costs of service. Water services with more dispersed customers must distribute drinking water, and pump wastewater over longer distances with more pipes, dispersed treatment infrastructure, and higher costs.

If New Zealand is to achieve the cost savings that WICS says have occurred in Scotland, then these key differences in the geography must be acknowledged. The distances between New Zealand towns mean that any benefit of physical joining of networks will not be justified due to the cost of transporting water (pipes and pumps). Water is valuable, but unlike oil and electricity, its value-to-weight ratio is low. To get economies of scale in water networks, network mergers only make sense where communities are close enough so that the transport costs of moving water, chemicals, and water engineering and technical staff from one place to the other are low.

Unfortunately, WICS’ modelling assumes that cost savings are largely driven by the number of people served by a single entity, ignoring the question of how far the residents are from each other. This is inconsistent with the economic literature or the reality of running a water utility. The WICS efficiency claims cannot be reconciled with the urban geography of New Zealand. In some cases where water networks are close together and the administration is merged, efficiency gains are possible. However, such instances have already been mostly exploited in New Zealand, like in Wellington and Lower Hutt which have shared a water network for over 100 years, and have been under shared management since 2014 or Nelson City and Tasman District which share a wastewater treatment plant. The administrative amalgamations of disconnected and distant water networks in the New Zealand reform proposal are unlikely to produce the significant efficiency gains claimed in WICS’ modelling.

Andreas Heuser is a Director at Castalia and New Zealander. He has led the Castalia analysis on New Zealand’s water sector reform.  Andreas has stressed the importance of geographical considerations on the claimed benefits of the reform proposal.

Lewis Whitelaw  is an Analyst at Castalia, Scotsman, and a New Zealand resident. He has contributed to Castalia’s water sector advice since his arrival from Scotland. Having lived in both Scotland and New Zealand, he was surprised to see the geographical comparisons made by WICS.

Veryy rapidly this web site will be famoous among all blog users, due to it’s pleasant articles. https://livetvgoo.com/

It’s nice to see the best quality content from such sites. https://freehorseracingtv.com/live/

Greetings! Very helpful advice in this particular article! It is the little changes which will make the most important changes. Thanks a lot for sharing! https://oneotv.uk/

Good article with great ideas! Thank you for this important article. Thank you very much for this wonderful information. live greyhound racing

I have read so many content concerning the blogger lovers however this paragraph is genuinely a pleasant piece of writing keep it up.newsmax app for android

Thank you for great content. I look forward to the continuation. https://no19butik.com/

Wonderful post! We will be linking to this great article on our site. Keep up the great writing https://farmasiucretsizuyelik.com/